Colbalt mining companies: Their impact on the environment and humanity - Permutable.ai

Colbalt mining companies: Their impact on the environment and humanity 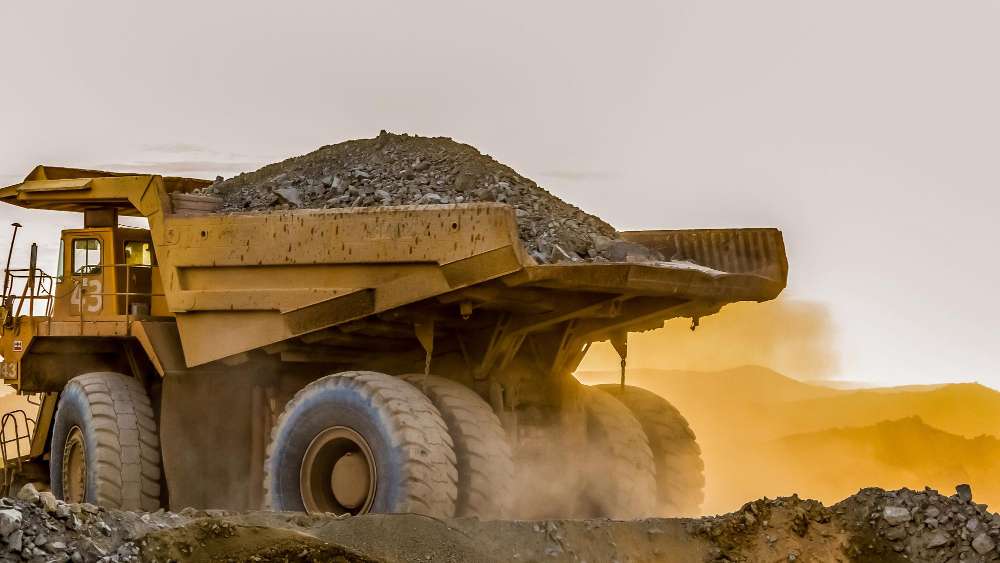 Cobalt is an important industrial metal used in many processes around the world. In fact, it is the third most important metal used in the modern world after aluminum and copper. Many different industries use cobalt as a key component to make other products and it has become a key component of green technologies. These include batteries, lubricants, construction materials, electronics, greases and so on. The number of applications for cobalt only increases year after year due to new technological developments and rising demand for this mineral particularly within the EV market. But how do colbalt mining companies impact the environment? And what impact does this have on humanity? Let’s take a look at what we know so far about cobalt mining companies and the impact on of colbalt mining on the environment and humanity.

Cobalt is one of the rarest and most expensive minerals in the world. It is a part of the minerals called “burgundy red cobalt minerals” that occur in the Democratic Republic of the Congo in Africa. Now, this organic-inorganic mineral is a common constituent of many different minerals. It is used in the production of lithium-ion batteries and other modern technologies. The production of cobalt is not limited to one location in the world. Instead, it takes place in different parts of the world depending on demand.

How Is Cobalt Mined?

Cobalt is mostly mined through “artisanal” mining. That is to say, it is extracted by hand from the mines. The mining process in the Democratic Republic of the Congo is quite complicated and involves many different steps.

Mining cobalt is a complicated process that involves many different steps. In addition, the mining process for cobalt is different from other metals like copper and iron because it is done in the open air. These factors make the environmental impact of cobalt mining very complex.

The first thing to consider is the impact of the different steps in the mining process on the environment. The calcination of the mineral and the purification process are the processes that produce the most pollution. In fact, there is particular cause for concern regarding the environmental impact of smelting and calcination because of the emission of large amounts of carbon dioxide.

Last but not least, cobalt mining can lead to significant loss of biodiversity. The mining process often involves the removal of large areas of land, which can lead to the destruction of habitats and ecosystems. This can lead to the displacement of native plant and animal species, and can also disrupt the delicate balance of an ecosystem.

In addition, mining can cause soil erosion and can lead to water pollution, which can have a negative impact on aquatic life. The use of chemicals in the mining process can also have a toxic effect on local flora and fauna.

The loss of biodiversity can also have ripple effects on other ecosystem services, such as pollination, pest control, and carbon sequestration, which can in turn affect human well-being and the functioning of the ecosystem.

Cobalt Mining Companies and Their Impact on Humanity

Cobalt mining has negative impacts on humanity. As well as environmental degradation, there are human rights violations, and health risks. The mining of cobalt can lead to the destruction of habitats and ecosystems, as well as pollution of air and water.
In some cases, child labour and forced labour in appalling conditions have been reported in cobalt mines including the lack of proper protective equipment. This is particularly true of the Democratic Republic of Congo, where a significant portion of the world’s cobalt is mined and where it is estimated that around 200,00 artisanal miners work in cobalt deposits and another million are economically dependent on their activity. Additionally, exposure to cobalt dust and chemicals used in the mining process can lead to health problems for workers and nearby communities.

Cobalt mining can be considered “greenwashing” because companies may make claims about the sustainability or responsible sourcing of their cobalt, but these claims may not be fully supported by their actual practices. For example, a company may claim to have a “conflict-free” supply chain for cobalt, but this does not necessarily mean that the cobalt was not mined using child or forced labour, or that the mining did not have negative environmental impacts. Additionally, the term “greenwashing” refers to the practice of companies making misleading or unsubstantiated claims about the environmental benefits of their products or practices in order to appeal to consumers who are concerned about the environment. This is particularly rife within the green energy sector and p-particularly within the EV market. This is why it is important to take a closer look at the companies’ actual practices, and to ask more questions about their supply chain before buying products that use cobalt.

There are several companies that are involved in cobalt mining, some of the major ones include:

Despite the above, what is interesting to note from our data is how little cobalt mining is reported on in the media, with plenty of companies who are connected to cobalt mining missing from the entire sentiment landscape. 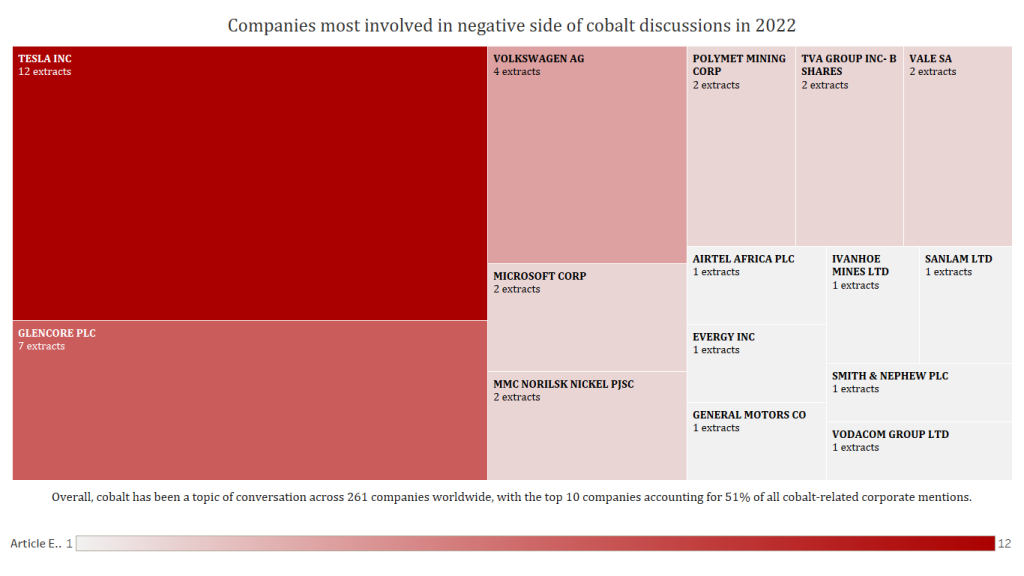 It is worth noting that some of these companies are taking steps to reduce their use of cobalt and to source it responsibly, due to the aforementioned ethical and environmental concerns surrounding the mining of cobalt. However, much more progress is yet to be made in these areas.

Cobalt is one of the most important metals used in modern technologies making it one of the biggest dirty secrets of the so-called green energy sector. It is mostly used in batteries, capacitors, blue light-emitting diodes (LEDs), and a variety of other items. The mining of cobalt is a highly energy-intensive process which means the environment is vulnerable to pollution as well as risks being post to humanity.

Although cobalt mining can not be banned outright, as it is an important metal that is used in many industries and products, the mining of cobalt should be heavily regulated and urgent steps should be taken to expose and mitigate its negative impacts outlined in this article.

For more data on colbalt mining companies and their impact on the environment and humanity get in touch.